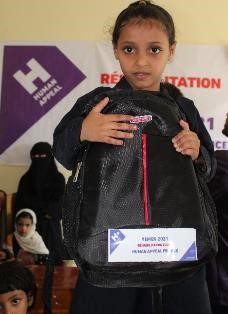 September 3 was the first school day for Basima. Her father had to put off her entry to school until next year because he was unable to buy school supplies for his daughter due to the lack of a continuous source of income.

The glad tidings news arrived to Basima’s father while the Human Appeal team passed him with bags on the backs of donkeys as they were going to school. He was afraid that twenty days have passed since the beginning of the school year, and perhaps the school principal will not accept Basima at the school because school registration has already closed and the school year has already begun.

The Human Appeal team reassured Basima’s father and asked him to bring Basima with them to the school. They promised to talk with the school principal to let him accept Basima this year even though she was 20 days late. Indeed, the team succeeded in convincing the school principal and Basima was accepted as a first grade student. Basima received her school bag with joy and tears as she shyly hid behind her father who thanked the Human Appeal team with a trembling voice affected by the intensity of the situation