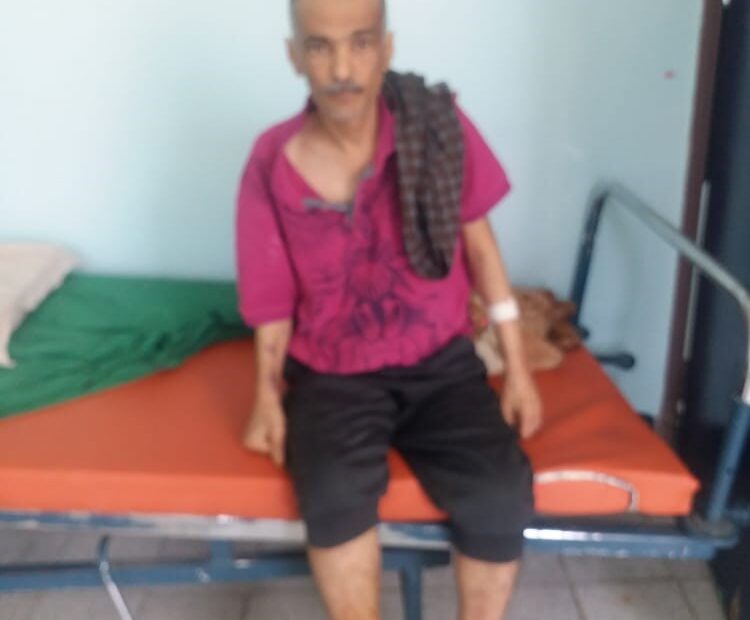 Haj Anwar, 40, used to lead a carefree and peaceful life. He used to look at his children as they went to sleep with a contented and happy smile. A wound in his feet turned into a lethal gangrene. His family did its best to treat the gangrenous limb; they sold and mortgaged most of the household goods to provide medicine for him and creditors were consistently demanding their money. It was an unbearable suffering upon the household, children and adults alike. As the gangrene spread in his lower leg, doctors advised an immediate surgical operation to amputate his leg. They sold everything to save the father and pay the expenses of the operation.

The HFY team and STC reached them and included them in the food basket project.

Haj Anwar’s wife was the first to arrive at the distribution site early in the morning and the first to receive the food basket. She was welcomed by the distribution team members as they inaugurated the distribution activity. She came back to her husband who received her with a weak but cheerful smile. She could see in his eyes the calmness that swept over his soul as if he was bidding her a farewell.

Three hours later Haj Anwar died. Severe pain and unrelenting suffering have finally come to an end. His last words were “may God reward those who help us.”

The YTF team offered their heartfelt condolences to the family and comforted them. The family of the deceased, despite their calamity, did not forget to thank HFY and STC.