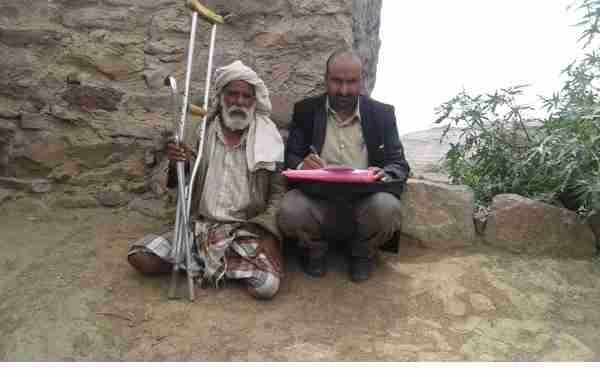 They used live in a rented house in a three stories building. The apartment that they were living in had many rooms and two separate bathrooms. The house was fully furnished and had all the essential household items. The father, head of the family, had a decent job and ably provided for the entire family comprising of seven members: wife, two sons and three daughters. He was freelancing in several fields but the income was consistent. The mother was a housewife. She was not very social, but visited her neighbours sometimes and occasionally had gatherings in her house as well. The boys went to school. Since the culture of Al Bayda does not allow girls to go to school, they stayed at home. The children had many friends in the neighbourhood and they met every day to play together. The family went on picnics, visits to parks and markets regularly. They were happy in their lives.
When the conflict started, the father lost his source of income and the family had to leave their house. They sold everything that they had: television, refrigerator, washing machine, etc. Sadly, after they left, the house was looted and all the remaining items were stolen. The father left for Sanaa to search for work and the mother moved in with us along with her children. They have no income and no one to support them.
I have a two bedroom house with a kitchen and a bathroom. We have some furniture pieces, a few mattresses and blankets and a few kitchen items. They are not much but were sufficient for me and my family. Now with another family living with us the house has become crowded and food and household items are no longer sufficient . Most of our needs are covered from the help extended by our neighbours and relatives. But it is not enough to cover our needs. Luckily we have sufficient water in Al Bayda through the local water network and there is a tank to store it as well.

At the time the Life Saving NFIs and Food Assistance Project started, we did not have enough blankets and mattresses. Some of us slept in the cold. We had very few kitchen items to cook. We could not afford fuel and used to collect wood as fuel. Sometimes we had to use the neighbours kitchen to cook and sometimes the neighbour provided us with cooked food. The children, especially the girls are the most affected. They were constantly falling ill and the older ones had started having joint and back pain.

Children are feeling very depressed because they cannot go to school.
It is very difficult to find a job in such a rural area. Even farming is difficult because there is no rain in most seasons and a person need to possess a land to go into that kind of work. The assistance provided by the project helped us for a while. After the project we don’t have any other option but to seek assistance from other humanitarian organisations.