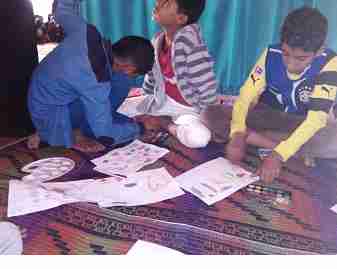 Rashwan is 14 years old. He is very brave and has a strong personality and physique. Rashwan loves to help others. He has three younger brother and two sisters. They lived a simple but comfortable life in Taiz as compared to their situation now.
The neighbourhood in which the children lived in Taiz was under heavy shelling. Their house got badly damaged and was no longer suitable for living. Rashwan and his family along with some relatives quickly rented a bus from the nearest bus stop and fled from Taiz to Ibb. In Ibb they rented a house in Reef Ibb. In the beginning their situation was comparatively good. One day the salary of Rashwan’s family, which was their only source of income stopped.
Rashwan joined the Safe Places with his brothers. But because of the difficulties they were passing through, one of his brothers left the Safe Places and took up a job with a Qat seller. Rashwan also took up the same job. But he was very much attached to the Safe Places and did not want to leave. So he agreed with the Qat seller to work with him half day in return of 500 YR per day and continued coming to the Safe Places after finishing his job.
Rashwan was facing a lot of trouble because of this personality. Being a child, he thought that he could continue to behave the way he did back home. But he soon learnt that this was not his home town – he was an outsider. Children in the new neighbourhood used to say to him, “ You are just an IDP.” Not being able to bear this, Rashwan started becoming violent towards them. He became very aggressive. But with the psychosocial support that he got at the Safe Places, Rashwan gradually improved and became one of the best students there.