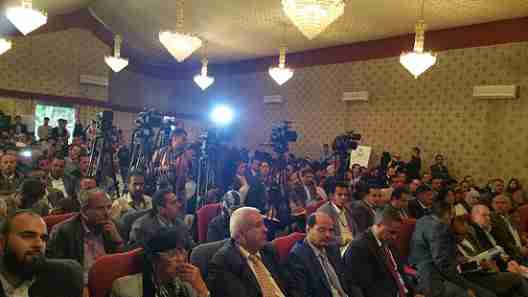 I would like to welcome you, and I highly appreciate your attendance and honor to us at the first conference of patients with renal failure, which is organized by the Foundation for the care of patients with renal failure, cancer and the humanitarian forum in Yemen coinciding with the World Day of Renal Failure, which falls March 15 of each year
Which aims to remind the suffering of our brothers from patients with kidney failure and the definition of the community of the dangers of kidney failure on both the individual and society
Brothers and sisters / The official statistics show that the total number of people suffering from renal failure in Yemen is close to 25 thousand patients and the patient was exhausted by the disease and the details of their lives, which is full of misery and pain and pain, so we resolved in the humanitarian forum and the Foundation of compassion to stand by their side and support them to win in their ongoing battle With disease.
Ladies and Gentlemen Over the past few days, the suffering of patients with renal failure has been exacerbated, especially after many laundry centers have been closed to government because of the lack of laundry solutions, medicines and the siege imposed on our people, which has had a major role in exacerbating the suffering of kidney failure patients in Taiz, Hodeidah, Sanaa, Of patients with kidney failure, and unfortunately, during the bleak years, many of the patients who moved to their Lord’s house left after waiting for death on the sidewalks in the hope of receiving washing rings that would save them from death
The Humanitarian Forum contributed to alleviating the suffering of patients with renal failure through a range of activities, the most important of which is the conference which is held in partnership and cooperation with the Foundation of compassion, which is the leading institution in the humanitarian work and the service of kidney failure patients and cancer, through which we seek your support and cooperation to find ten thousand An industrial laundry in which we contribute to alleviating the suffering of patients suffering from renal failure in Yemen, who have been exhausted by the days and need pain and gave a dark dementia to the details of their lives. Therefore, we call on you in the name of humanity to unite the official and community efforts to do more to raising their hope and wiping dust from their lives.