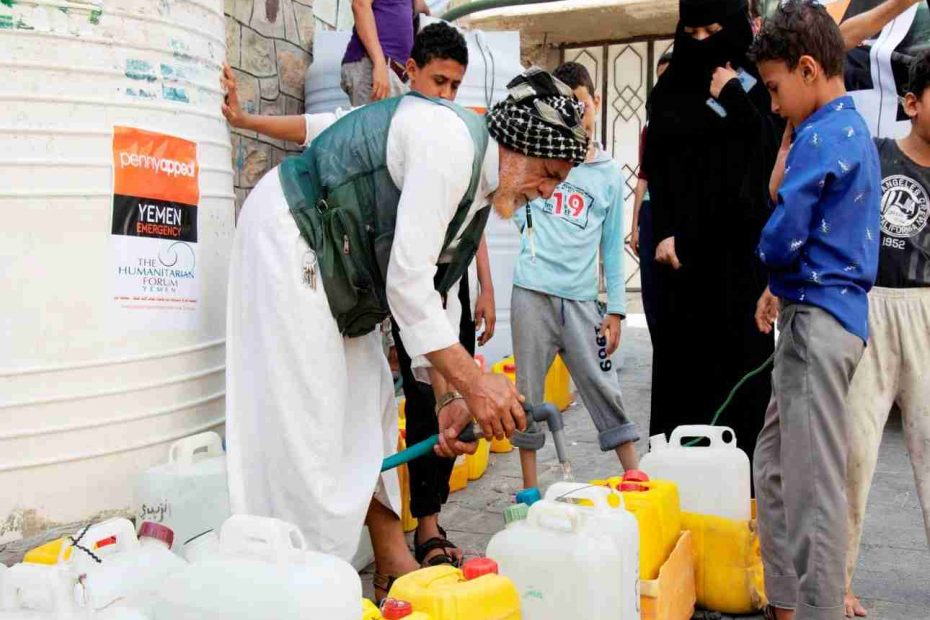 Mohammed Beshr, an elderly person from Taiz city, is afflicted with many chronic illnesses. His wife died a few years ago and left children who are still in need for the gentle caring of a mother. His older son suffers from psychological disorder, feeling life is not worth living. Mohammed, as a father, has to face the gloomy future and the cruel world all alone. Each night he turns his head up to the dark sky, seeking salvation from his miserable life. Despite the immense hardship of merely staying alive, he has a firm faith in his Lord.
His sons and daughters are too young to suffer from lack of a decent life. His older sun, who was their sole bread owner, is engulfed in psychological trauma and his condition deteriorates each day. The hapless and helpless old father has to carry the burden alone.
Clean drinkable water, one of the basic necessities of life, is not available in his household. Empty water tanks, which were once used to provide drinking water, are scattered in the area where he lives. Mohammed has to travel on foot a long distance to the nearest drinking water outlet in order to buy or obtain drinkable water.

When Penny Appeal provided clean drinking water and filled those empty tanks, Mohammed, as well as many others, was exuberant.

“What I was spending to buy drinkable water will now be used for my children’s education,” He said with a sigh of relief. “I also would like Penny Appeal to support our children by paying for their schooling.” He then held his arms to the sky, supplicating the Almighty to preserve Penny Appeal and the field team.