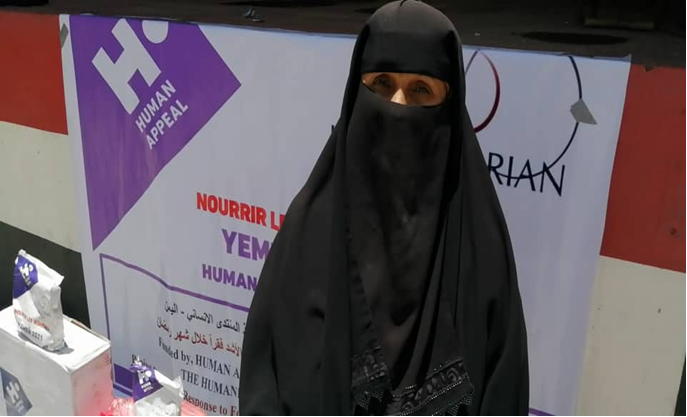 Ibtesam Ahmed Hatem Nasr Al-Soufi lives in Al-Dhabouah neighborhood. Ibtesam and her husband, who suffered from brain cancer, could not bear the tremendous cost of treatment and the difficulties of moving to hospitals and cancer treatment centers. Both were unable to work due to the husband’s sickness.

The family does not live in a normal house; they live in a single-room tenement in which the couples tried to use it as a makeshift candy shop to sell light products such as chewing gum, lollipops, sweets and roasted melon seeds – a business that requires a minimal capital. Their hope was dashed as the prices increased and the situation in the city went from bad to worse.

When the father’s illness grew worse, the young daughter worked instead of her mother who tended to her ailing husband. The family was completely dependent on their son who provided them with money until he was captured by one of the armed factions in the city.

The family’s suffering culminated in the death of the father, who left behind him little children and a wife who didn’t know where to go or what to do.

By the end of the month of Ramadan the project provided them with a food basket which improved their living conditions and saved them the cost of buying these food stuff from the market. “When my children saw our room filled with food stuff they jumped for joy,” Ibtesam said with tearful eyes. She expressed her thankfulness to HFY and Human Appeal.