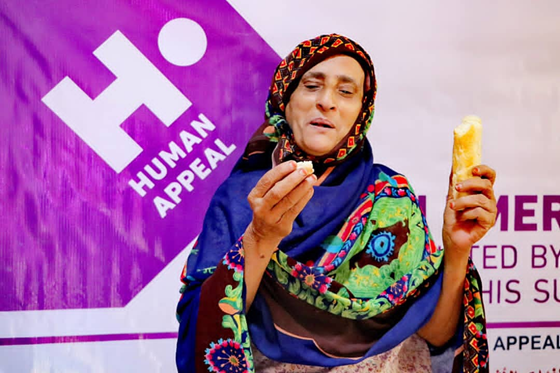 Alawiya Abdo – a widow – a resident of Sallah District, lives in a very small home that contains two rooms and has six sons. All of them are unemployed and cannot work due to health problems. The first one suffers from mental illness, the second one suffers from chronic diseases, the third one was injured in a traffic accident, which led to physical disability. As for the rest of them, they are minors. Thus, Alawiya’s family is poor without income because of the extreme poverty. Before they were targeted in the bread project, they told us that they used to sleep for days without food.
Mrs. Alawiya’s family was targeted by the bread project, and it was a big surprise to them and they were happy when they heard about the news because they could not provide bread due to the high prices in Taiz Gov. as the bread saved for her money for selling many things such as flour and gas which she is not afford to get and alleviate her thinking in saving bread for her children.
Mrs. Alawiya became very happy with this bread that she eats and satisfies her hunger throughout the day. She thanked the Human Appeal Organization and Humanitarian Forum for this project, which is considered the most important project that saved them from hunger and returned the smile, and hoped that this project would continue without interruption. She concluded her speech with a supplication for the two organizations and their workers.